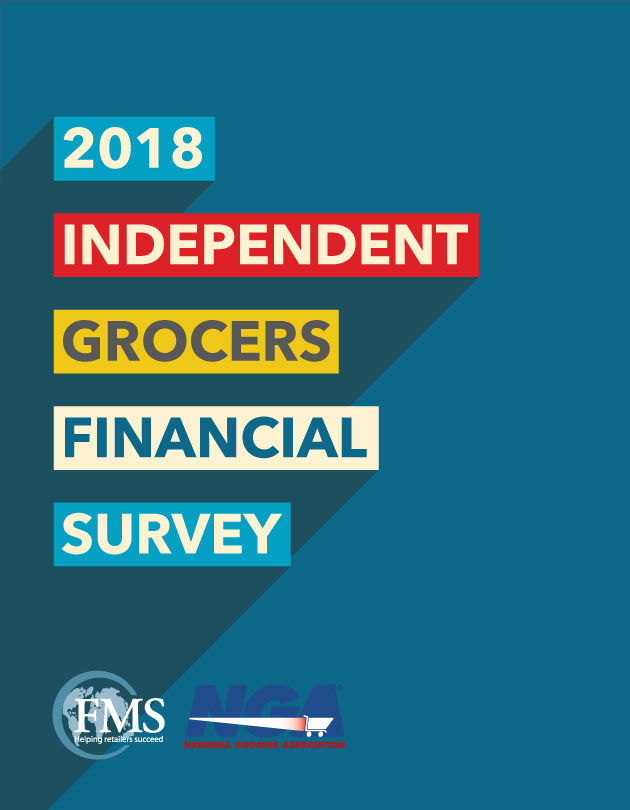 Arlington, VA (June 12, 2018) – FMS Solutions Holdings LLC (FMS) and the National Grocers Association (NGA) released the 2018 edition of the Independent Grocers Financial Survey, which covers fiscal year 2017. The survey, now in its 13th year, showed that independent grocers’ same store sales were down 0.6 percent compared to the previous year. Despite the decline, it is an improvement over last year’s results, which showed a 1.62 percent decrease in same store sales.

In fiscal year 2017, food at home price deflation continued to be a drain on sales. Average food at home prices were 0.2 percent lower than they were a year prior according to the Bureau of Labor Statistics. Deflation was especially drastic toward the beginning of the year, however by December, monthly food at home prices began to show improvement.

“Independents have always faced stiff competition from other retailers, especially big chains and discount warehouses,” says Robert Graybill, president and CEO of FMS. “But now they’re competing with e-commerce, home delivery, and meal kits. But our study has shown that independents are able to adapt where they’re able and embrace their strengths over these new formats.”

“There’s no doubt that the supermarket industry is changing at a rapid pace. However, independent grocers have faced industry shifts and challenges in the past and have proven resilient. They are the entrepreneurs of the industry, and have the ability to experiment and adjust as needed to meet their shoppers’ needs,” said Peter Larkin, president and CEO of NGA. “This study offers good insight on where the profit leaders are excelling and areas of needed improvement by independents.”

Indeed, despite a growing number of competitive formats, independent grocers’ margins were slightly ahead of where they were a year ago. Additionally, 71% of the respondents indicated that they are more optimistic about their business’ future. The 2018 Independent Grocers Financial Survey included results from 139 companies across 35 US States and five Canadian Provinces. The study’s goals are to gauge the financial performance of independent grocers and put it in context with economic, political, and competitive factors. This report also examines how the profit leaders operate their business differently, such as their inventory and shrink, and generate more net profit.

The National Grocers Association (NGA) is the national trade association representing the retail and wholesale grocers that comprise the independent sector of the food distribution industry. An independent retailer is a privately owned or controlled food retail company operating a variety of formats. The independent grocery sector is accountable for close to one percent of the nation’s overall economy and is responsible for generating $131 billion in sales, 944,000 jobs, $30 billion in wages, and $27 billion in taxes. NGA members include retail and wholesale grocers, state grocers associations, as well as manufacturers and service suppliers. For more information about NGA, visit www.nationalgrocers.org.

– FMS In The News